This truly remarkable book gives a realistic understanding of the high price and higher privilege of being on the most exciting, fulfilling adventure known to man… obeying the next thing God tells us to do, with the Holy Spirit’s enablement.

If you yearn for a deeper understanding of God’s character and His ways, then “Epic Faith” will certainly help to get you there. Marty tells it like it is, in his transparent un white washed style, coming from His and Kelly’s numerous personal sagas.

Warning: This book is not for Wimps! I give it my highest recommendation.

The word ‘faith’ often refers to ones religion or system of beliefs.  For my friend Marty Meyer it is a Bible based, experienced life journey.  This personal, unique story is can’t-put-it-down exciting because it is a proven faith of lived-out reality where God is often the only possible explanation.

If your hungry to know God through his word, through the voice of the Holy Spirit and through his character in the difficulties and opportunities of your life then make sure you read this book. Marty Meyer takes us through his journey in following God and gives us practical stories that will challenge you to go deeper with God whether you are a new believer or a tried and true saint. Marty is honest in sharing his fears and unbelief as he stepped out on the water to follow Jesus and how God continued to grow him in being a man marked with epic faith.

God writes his story in the lives of people throughout the Bible.  He does the same today.  In Epic Faith Marty tells his story, but he demonstrates it is more about God’s story than it is about his own.  Get ready to be challenged and opened to how God is inviting you into his mission!  Get ready to discover your own epic faith!

Marty’s stories are full of intrigue, adventure, raw faith and miracles, and best of all they are all true! If you have a radical love for Jesus, you will not be able to put this book down!

Marty Meyer has written a remarkable book. As you read it you discover that it is like sitting on a porch with a friend recounting poignant lessons he has learned. In a graceful, winsome way, he conveys deep truths of the Kingdom of God that motivates the reader to say, “Yes” to God for whatever next step He is calling for in their life.

Dean of International Affairs, The Anglican Church in North America

If your faith walk has become stagnant, then you need to read Epic Faith. You will be inspired to grow your own faith, which will allow you to accomplish great things for God’s kingdom through your life.

I have invited Marty to speak and every time he opens his mouth I find myself inspired to be more loving, more resolute in seeking God and more willing to trust Him. This book is no different. We hear stories of people who have trusted God and been used by Him to do amazing things but Marty challenges us to actually live in that story line. Through this book Marty’s voice is resonating, prompting, and inspiring us to be willing to do anything for Christ.

“Without Faith, you cannot please God”. Marty clearly outlines that real, Epic Faith, is actually a lived-out and fulfilling relationship with the Living God. The stories Marty shares are his own, but the truths contained in them are powerful, eternal. His testimonies will reach into your heart and encourage you to write your own story of Epic Faith. I have known Marty for many years. He is as real as it gets. The richness of his faith is attested by those closest to him. Sharing vulnerably, Marty illustrates through his own life that, a life lived with lesser lovers is bound to disappoint. But that a life lived encountering the Living God, is destined to fulfill. As you journey with Marty through the pages of his life, you will meet the source of all change, of all things eternal. I encourage you to read and reflect on his story. It is a testimony of someone who did not settle for lesser lovers, but responded to the greatest lover of all, and there, he found both power and peace.

As a leader in YWAM, Marty has practiced our “do first, then teach” value. Marty has been practicing epic faith for years, now through this book he is teaching others to do so. We need more books like this to not only inspire but to teach how important it is to listen to Jesus and obey him in all details.

Co-Founder, Youth With A Mission International

I would like to commend Marty Meyer to you as a man of faith, who leans into God’s WORD, listens for His guiding VOICE, and obeys trusting in His CHARACTER. Marty shares my commitment to walk a faith-filled life, based on God’s faithfulness to us, and to search out young people with leadership potential to help lead the Church in the decades to come.

Epic Faith is a very personal and practical book, filled with wonderful stories of God proving His faithfulness to us when we step out in obedience to Him.

Co-Founder, Youth With A Mission International

Marty has written a gripping, thrilling and refreshing account of what a life of faith looks like when a life is fully surrendered to Jesus. The stories are incredible and give much glory to God. Marty has managed to masterfully lace together exciting storytelling of his journey with God intermingled with scripture, sound teaching and wise counsel about living a life of faith. You’ll not get through this book without being utterly challenged and inspired by the Holy Spirit to live your own life of faith and fulfill the High Calling of God; nor will you get through it with dry eyes. This is one of the most informative, encouraging and uplifting books I’ve ever read, a must read for all ages.

Marty Meyer is a dynamic leader that has helped mobilize thousands of high school youth through our YWAM – Mission Adventures program. I first meet Marty in 1989 when he joined a small outreach team that went around the world. Marty is leader who hears from God, obeys God and trusts God even when the circumstances look impossible. Marty is a leader that embodies Epic Faith…

Marty has written a gripping, thrilling and refreshing account of what a life of faith looks like when a life is fully surrendered to Jesus. The stories are incredible and give much glory to God. Marty has managed to masterfully lace together exciting storytelling of his journey with God intermingled with scripture, sound teaching and wise counsel about living a life of faith. You’ll not get through this book without being utterly challenged and inspired by the Holy Spirit to live your own life of faith and fulfill the High Calling of God; nor will you get through it with dry eyes. This is one of the most informative, encouraging and uplifting books I’ve ever read, a must read for all ages.

Epic Faith is one of the most impacting books I have ever read.  This book wrecked my heart again and again as tears streamed down my face.

If you are a young Christian, Epic Faith will put a fire in your heart, build great faith, and give you a desire to live for God.  If you have served God for many years and have become weary, Epic Faith will deeply impact you, calling you into new intimacy and bringing renewed life in Christ.

Founder and Director, Streams of Mercy

People tend to follow leaders who inspire them.  Marty’s personal journey with the word of God, the voice of God, andthe character of God, will motivate growth toward greater faith, devotion, and personal connection with Jesus. Refresh your faith…read this book!

“Epic Faith” reminds us that with God, nothing is impossible! Marty’s transparency and vivid detail had me hanging on every word. This book stirred up something inside of me that increased my own personal faith by reminding me that God is still in the miracle working business!  “Epic Faith” will remind the reader that God loves us and cares deeply about every detail in our life.

I have known Marty and Kelly Meyer for over 20 years, having met them shortly after they accepted the invitation to lead the Mission Adventures program at Youth With A Mission in Los Angeles. I was able to observe them growing in their own “epic faith” up close and personal as I would visit that campus to teach at least twice a year during their tenure there. Since their move to Idaho our personal times have been fewer and farther between but I have been keeping in touch on their ventures in faith in the area of world missions.

“Epic Faith” looks from the outset like a simple three-point message on faith that any preacher could come up with by simply using a concordance. This autobiographical sketch of their lives, however, is no such trite treatment of faith as a theoretical concept, but a raw account of a sometimes not-so-epic faith as they grew in obedience to the next thing God told them to do. It is filled with raw honesty and the emotional ups and downs of living a life of faith and understanding of both the wisdom and revelation (Eph. 1:17) that it takes to truly live a life trusting in Gods’ Word, Voice and Character. Marty’s balanced biblical treatment of issues which in other sectors have become controversial are broken down into 26 chapters with simple exhortations delivered via teaching and story.

As is indicated in the opening pages this is not a self-congratulatory spotlight on Marty’s own epic faith but about a young couple that was willing to suffer the rejection of their peers and misunderstandings of others to pursue God’s dream for them which helps them to equip many others to dream for themselves.

“Epic Faith” is a fast-moving epic tale of a supernatural God working through natural people. It was an exciting read for me because I know them personally but I trust it will also be meaningful even if you don’t. Just know that as you read the following pages your faith will be stirred as you not only focus on the story but also apply these principles to your own journey. Happy reading.

International Dean, College of Christian Ministries, University of the Nations

Dive straight into the feedback!Login below and you can start commenting using your own user instantly

DISCOVER THE EPIC PRAYER STRATEGY TO PUT YOUR FAITH INTO PRACTICE 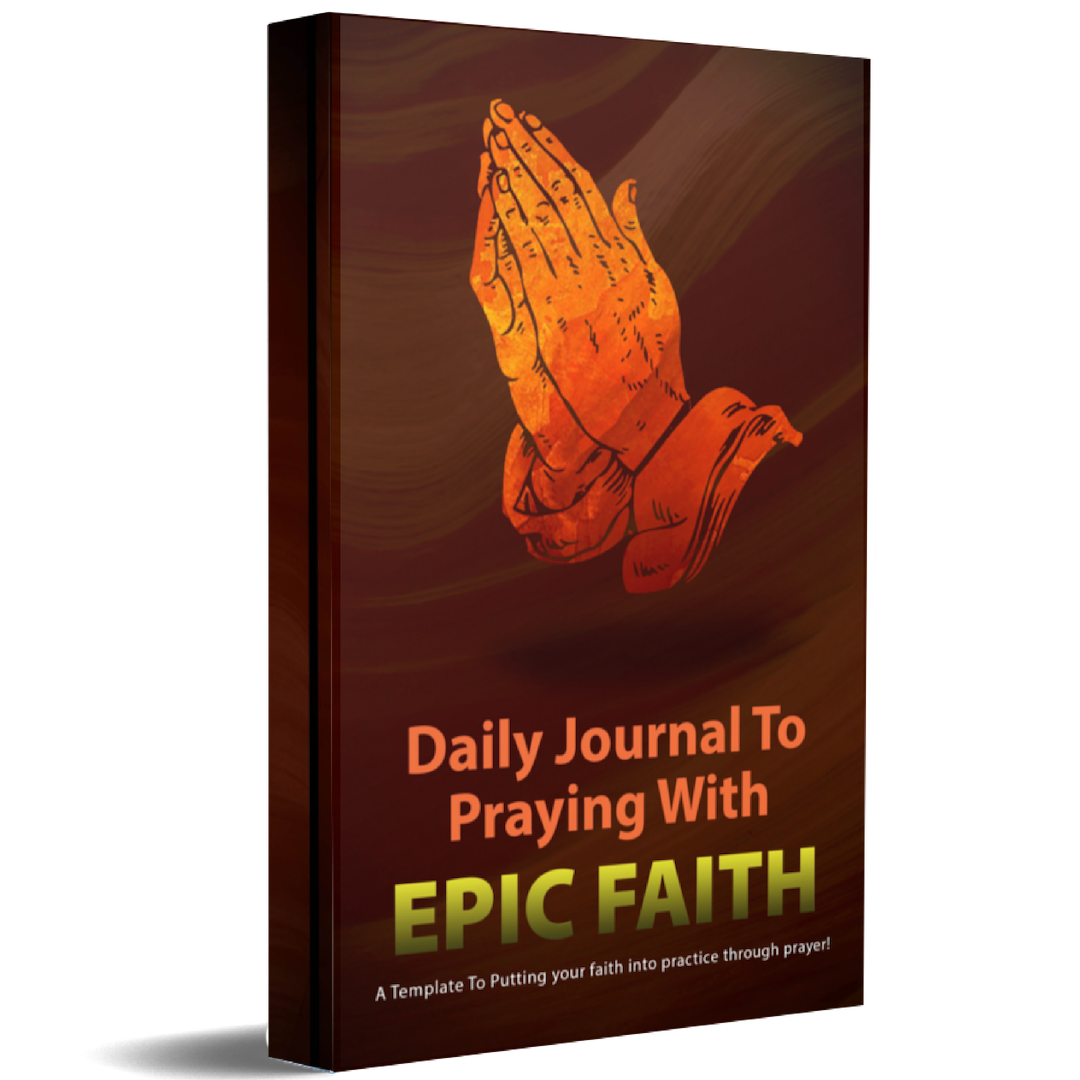